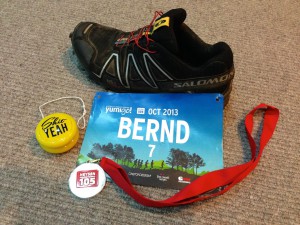 After he finished 1st place, Toby Wiadrowski wrote: “…out of all the 100s I’ve done, without a doubt the toughest conditions I’ve ever faced.” Tough conditions indeed: cruel heat, no easy terrain, and, well, 105 kilometre non-stop through South Australia.

This is where the run was located in Australia: 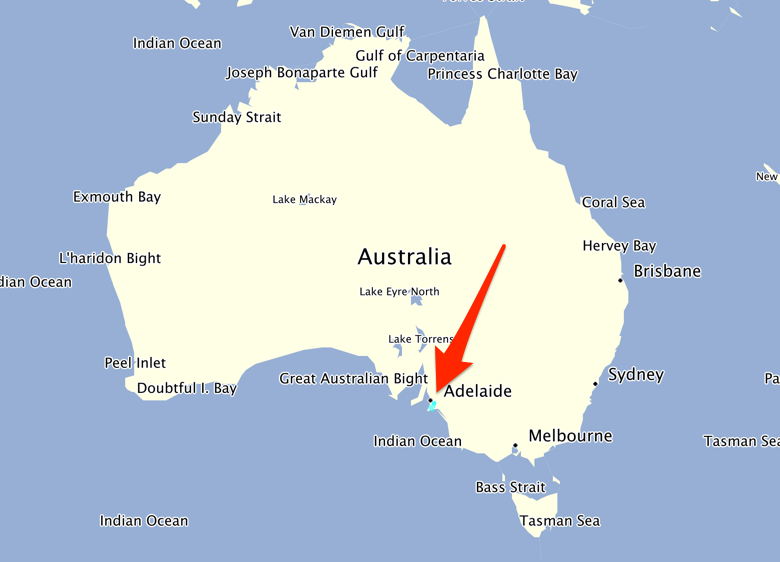 That tiny little dot there is Adelaide. The next map shows the course relative to Adelaide: 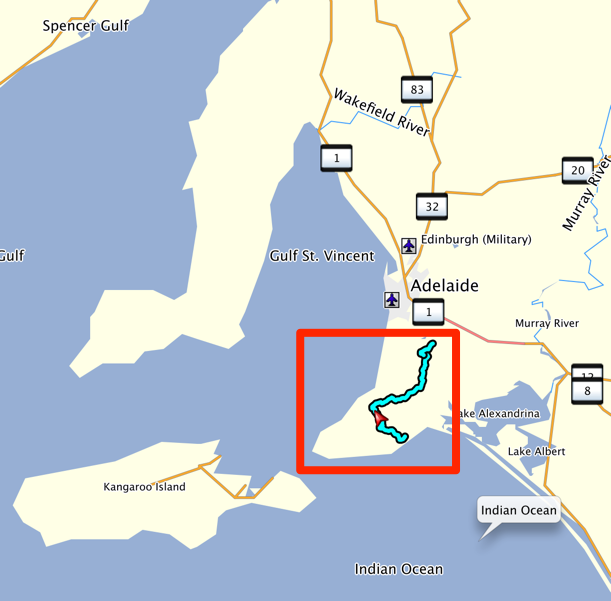 The last map shows the route of the race in the red rectangle in more detail:

If you want to play around with this map, check out the official version on GPSies.

Since my wife couldn’t join me as a supporter this time, I promised to stay in contact with her via text messages. The plan was to text her after every checkpoint. Since copy-paste is cheap, I also posted parts of those text message directly to Facebook. Here’s the result, my race on Facebook (CP means checkpoint):

Here’s what happened: Weather forecast was 32° C, at some points temperatures rose up to 34°. No clouds. This was by far the hottest day I experienced in the last 6 months, meaning that I couldn’t train myself accordingly before this event. It was windy, meaning that it only felt cooler, but actually increased dehydration. Only occasionally there were trees providing shade, except ironically for the part most runners ran at night through Kuitpo Forest.

I had this plan: start fast when the temperature is still low, fight yourself somehow through the heat in the middle of the day, and, if survived, make the best out of it during the night. That plan kind of worked. Until before CP 2 at km 37, temperatures where below 30° C, and I was in good shape with a time of only 4:34 h. But somewhere around km 35, my systems, one after another, shut down.

First I developed impressive blisters. Last count after the race was 7, big as 50 cent coins. Usually I just have one or two smaller blisters during 100k runs, but the heat made it much worse this time. After a few kilometres I got used to them.

Next system failure was my groin, left side. I almost panicked when I felt the pain, since it was exactly the same pain which made me drop out of TNF Gran Canaria last year. From here on I did less uphill running and more uphill hiking, and after a while the pain didn’t get worse. 20 km later everything else in that region was painful, so I don’t know if the pain in the groin stopped or if I just didn’t feel it anymore.

Next came the digestive system. Around km 50 I wasn’t able to swallow solid food anymore. The bars just didn’t go down, I was choking with every bite. Mixing with water didn’t help either. From there on and for the rest of the race I used gels only.

One or two kilometre before CP 4, km 74, I got stomach cramps while I was running on the very few bitumen streets on that course, even though it was totally flat there. Gladly enough the cramps vanished after CP 4, and so did my confidence in finishing the race. I was barely doing more than 5k per hour from CP 2 to CP 4.

I took a longer rest at CP 4, trying to regain some strength. When I wanted to get up again, my body was obedient but my consciousness was not. I lost orientation and struggled to find my path, and the next 2 kilometres I walked really slow.

Finally, around 6pm, temperatures began to drop slowly. Somewhere between CP 4 and CP 5 I ran into Adam, one of the volunteers, and he said to me: “So many people dropped out, but you are still moving!” That became part of my mantra, which I kept saying, singing, shouting until the finish line: “Keep moving! Still moving! Shit yeah!” The “Shit yeah!” part comes from my wife, who packed a support package including a yoyo, and written on that yoyo are the words “Shit yeah!” – awesome idea!

After 15:33’11 hours I made it into the finish. And what a finish that was: People started cheering and applauding while I was still 500 m away. When I crossed the finish line, race director Ben Hockings gave me a medal, shook hands, and hugged me. Everyone cheered, laughed, congratulated me, hugged me, and applauded. Lots of other runners were still out there, like Alex Strachan and Barry McBride, who both were about 2 hours ahead of me, and like Dej Jamieson, who had to drop out during the race; Alex, Barry, Dej, and everyone else there made party when I arrived – that was sensational and made me very happy :)

Whenever I came into a CP, everyone was immediately alert to help me with whatever I needed: “Refilling the backpack? Not a problem. Water? Sure. Ice in the water? Will do. Wait, I’ll get your drop bag…” Wow, just wow! But it wasn’t only about the first class service. That was service with a heart, very kind and caring, very personal, like coming home to family. This is what made this race so special to me: The total attention every athlete got during the race.

From my point of view, race directors Ben Hockings and Sadie Cranston organised a fantastic race. The route was marvellous, and since that was my first time in the Adelaide area, it was a strong first impression when I saw while running – check out the pictures! All the volunteers and fellow runners where so kind and nice, and I figure that has a lot to do with Ben’s and Sadie’s organisation. Kudos for such a great race!

See you all maybe next year :)

Check out the photos, I put some effort into commenting them. [Update: I split them up into 3 different galleries, so that they load faster.]

Outtake: After I crossed the finish line, I wanted someone to take a photo of me. Update: Susan Cath] was so kind and wanted to help me. So I got up, totally exhausted and stiff, pulled myself together, got into some kind of victory stance, and then this happened :)

to posts via RSS feed

to posts via email